'So You Think You Can Dance' exposes a vagina on Fox — or did it? 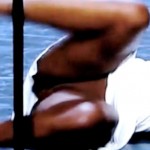 I have never received a phone call like this: “Fox just showed a vagina on national television.”

The program was “So You Think You Can Dance” A female contestant fell to the ground and exposed … her privates, apparently.

Mark Annotti of Orlando called to say his 13-year-old daughter was watching the show, and she questioned whether a female contestant was wearing panties. Mark and his wife sent their child out of the room and replayed the clip to confirm their daughter’s suspicion.

I saw the clip. It looked as if the dancer wasn’t wearing panties. What would Ginger Rogers say?

Annotti was shocked. “The show wasn’t live,” he said. “How could the editors allow something like that to happen on prime-time television? It’s very disturbing. I wasn’t even in the room. My daughter watches the show religiously.”

“The footage in last night’s ‘So You Think You Can Dance’ was reviewed thoroughly by the network’s Broadcast Standards & Practices prior to air, and it was separately confirmed with the dancer that she was wearing flesh-toned dance gear.”

PrincessRaji I missed this!! :/ RT @PerezHilton: The crotch flash everyone is talking about! SYTYCD!

I received several comments underscoring this point: It is anatomically impossible to show the vagina.

As one woman wrote: “The vagina is the internal canal leading to the uterus. No part of it is externally exposed. A woman’s external genitalia is correctly called the vulva.” The reader added: “One might claim that vagina has become street slang for a woman’s privates, but that will never change in standard English, because it is an anatomical and medical term, and those do not change with fashion.”

So I guess we can say this flap was a teachable moment.