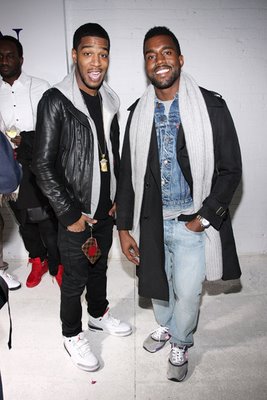 Twenty-three years ago Run D.M.C. told the world about “Christmas In Hollis,” and now Kanye West is taking the sentiment to another New York City borough for his new track “Christmas In Harlem.” The final version, which is reportedly going to hit iTunes tomorrow, features Cam’Ron, Jim Jones, Pusha T, Musiq Soulchild and Big Sean. “Wonderful night to be alive baby,” raps an unusual cheerful West. “I’m so happy I’m with my baby. And we a lil late wit’ the Christmas gifts. Rushin’ for the mall, don’t trip, you know I drive crazy.”

The track, which will likely be West’s final release of 2010, caps off an incredible year for the rapper. His fifth album My Beautiful Dark Twisted Fantasy, debuted at the top of the Billboard chart and was named the best album of the year by Rolling Stone and many other outlets.

He recently played a triumphant, last-minute show at New York’s Bowery Ballroom, but there’s no word on what his tour plans are for next year. He’s currently traveling around Australia with Jay-Z as they work on their upcoming collaborative LP Watch The Throne.