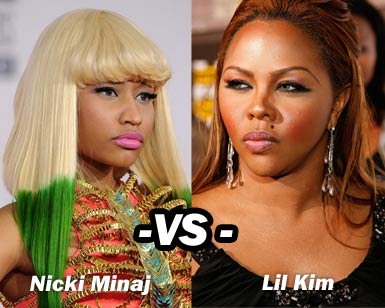 The Barbie vs. Barbie beef has officially reached DEFCON-1.

This week Lil Kim took her issues with Nick Minaj to another level releasing her video for the scathing mixtape cut “Black Friday”. To add further insult to injury, the clip was directed by Fendi, Nicki Minaj’s former manager, and shows a Nicki Minaj clone attempting to replicate Lil’ Kim. The clone references classic Kim videos like “Crush On You,” off Lil’ Kim’s debut album Hard Core. “Black Friday” appears on the same titled mixtape, which Kim alleges sold record setting amount on Pay Pal in just under 24 hours. The mixtape is essentially a collection of Minaj jabs wrapped into one project.

The question is, where is this beef going?

Nicki’s response thus far to Kim’s browbeating has been nothing more than giggles on Twitter, with the exception of her interview last year with Angie Martinez of NYC’s Hot 97 radio station, where Nicki posed a rhetorical question to Kim, “Where is your music?” Three months later it appears Nicki has found her answer.

“While I do see maturity in the way Nicki Minaj has handled the situation thus far – brushing it off with a few “Lol” tweets here and there – I think it’s time for Barbz to speak up,” Ramirez continues. “It does speaks volumes that with just the sales earned from ‘Roman’s Revenge,’ Nicki Minaj can buy out Kim’s imaginary Pay Pal records.”

This behavior is historically typical of Lil’ Kim.

“Kim has had long-standing beef with other artists, most notably Foxy Brown, with whom she never reconciled,” Steven Horowitz, Associate Editor of YRB Magazine recalls. “She knows how to hold a grudge.” Horowitz doesn’t see the situation escalating any further. “While she might be at the peak of her intense attack on Nicki, it will probably fizzle,” he states. “But like with Foxy, she’ll still fire errant shots when she can.”

There is also a slight possibility that Nicki Minaj will entertain this battle.

“I would love for the tiff between Lil’ Kim and Nicki Minaj to play out much in the same way Canibus and LL Cool J’s beef did years ago, where both continue to release intriguing dis records that become a part of hip hop history,” Georgette Cline, Editor at AOL Music and Rap-Up.com says. “But ever since Kim put out the ‘Black Friday’ track last year, we haven’t heard much retaliation from Nicki on record besides the ‘has been’ remarks on ‘Roman’s Revenge.’ Either Nicki’s trying something new by not addressing the mockery that is Kim’s mixtape cover or she’s just letting the dust settle before she drops a lyrical bomb on her.”

Ramirez agrees, “I want to hear Minaj’s thoughts, whether it be via a dis record or an interview.”

Prior to dropping “Roman’s Revenge”, Nicki inserted subtle jabs to Kim on tracks like Kanye West’s “Monster,” Trey Songz’ “Bottoms Up” and her Will.i.Am collaboration “Check It Out”. However, Nicki has yet to release a work dedicated mainly to Kim in the manner Black Friday has been dedicated to her.

“Kim is digging her own proverbial grave at this point in the hip hop history books,” states Dove, Editor of UrbLife.com and RadioPlanet.tv.

Dove continues, “I think people would respect a toe-to-toe lyrical joust, but Nicki moved on from cypher battling to become the pop diva she is now. Kim needs to grow up, seriously. Nothing good can come of this.”