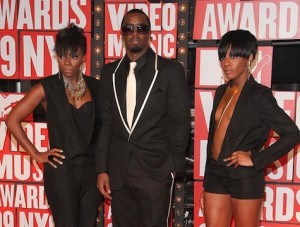 Bad Boy Records CEO Diddy finally addressed topping the hip-hop Forbes list this year, edging out stiff competition in the form of Jay-Z and 50 Cent with around $550 million in the bank.

Rather than bash the runner-ups, Puffy playfully said it was his turn to shine.

“I’m usually at No. 1,” Diddy said in an interview. “Our plan was to always flip-flop on it. This was the year I told him that we had to flop it back to its original owner. We push each other, we inspire each other. It’s just a beautiful relationship of natural competitiveness. But you know, it’s back at Bad Boy.” (Hot 97)

A few days ago, 50 Cent gave his take on the annual Forbes round-up.

“The Forbes list is fine, but I’m still on the wrong list. I need to be on the [Fortune] 500, the company list without it actually being hip-hop. In order to do that, we gotta do business on a whole other level,” Fif said in an interview. “[Record sales?] I can be concerned about being relevant to the culture and recapturing the energy you had once upon a time, not an actual number. It’s not even about the actual number of sales.” (Shade 45)

Dr. Dre ranks third with $270 million, doubling from a year ago thanks to a major sale. In August, handset maker HTC paid $300 million to buy a 51% stake in Beats Electronics, the company founded by Dr. Dre and Interscope chief, Jimmy Iovine in 2008. Birdman clocks in at No. 4 with a fortune of $125 million. He cofounded Cash Money Records with brother Ronald “Slim” Williams two decades ago, inking a very favorable $30 million distribution deal with Universal in 1998. Rounding out the Forbes Five is Curtis “50 Cent” Jackson at $110 million. The Queens-born rapper earned $100 million on the sale of his Vitaminwater stake in 2007–and tens of millions more from touring, record sales and clothing–but spent freely on cars and renovations to his mansion, formerly owned by Mike Tyson. (Forbes)

“Number one is Diddy at $550 million. He’s number one, far and away from everybody else mainly because of Ciroc,” editor Zack O’Malley Greenburg said in an interview. “He’s got this incredible deal backed by beverage giant, Diageo. He gets a huge cut of profits and he’s entitled to a split in profits of any sale of the brand. Second up we have Jay-Z. Jay-Z’s one of the only artists whose making a lot of music actively. He released Watch the Throne last year — so Jay-Z’s right up there.” (Forbes)