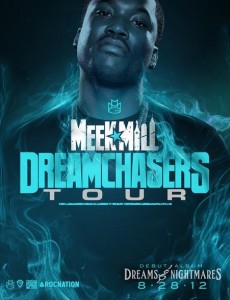 After recently cancelling his European tour dates, Meek Mill is bringing his dreams and nightmares to a city near you. With 16 shows run Meek is kicking off his Dreamchasers Tour in Denver, Colorado at The Fillmore Auditorium and wrapping it up in New York City just in time for the official release of his debut album Dreams & Nightmares set to drop August 28th. Check out the dates below.