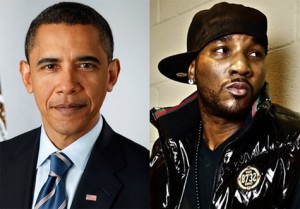 Via XXL: Back in 2008, Young Jeezy saluted President Obama with his single, “My President” off the The Recession album. The track paid tribute to the first Black President’s historic winning campaign.

On Saturday night (April 28), the Commander-in-Chief offered the nod of respect back to Jeezy.

“In my first term I sang Al Green. In my second term, I’m going with Young Jeezy,” Obama joked during the White House Correspondent’s Association Dinner, which was hosted by comedian Jimmy Kimmel, on Saturday night. “Michelle said, ‘Yeah.’ I sing that to her sometimes.” Check the video out after the jump.

I wonder if the audience actually knew who he was talking about.