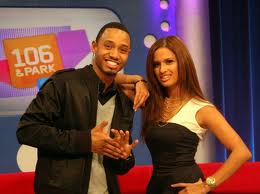 After weeks of speculation, longtime “106 & Park” hosts Terrence J and Rocsi Diaz are out to explore new pastures by leaving their jobs on the daily BET music video show.

“Today, after seven exciting years, 106 & Park hosts Terrence J and Rocsi announced that they will be leaving the show. It is no secret that there are a number of opportunities coming their way and we’re fortunate that they’ve been with 106 & Park for so long. They will be staying on the show for a while, so that we can have a “victory lap” — a celebration of their years at the helm of 106 & Park — before their departure. Terrence J and Rocsi are destined for great success and we at BET Networks will always take pride in being their original home — and be a place where I hope they’ll always feel welcome.” (Statement)

Terrence and Rocsi made an emotional announcement on today’s 106 & Park, sharing stories from their years on the show. “The first day I cracked the mic on 106, I was staying on a cot in a basement,” Terrence said, while Rocsi added, “Until the moment we leave, we pledge to bring you young Black culture. It continues to be our honor to do this for you.” (BET)

Terrence J has landed himself a new gig. The media personality, born Terrence Jenkins, is leaving BET’s 106 & Park in lieu of his growing acting career, and might become the newest co-host of E! News. Jenkin’s, who co-stars in the comedy Think Like A Man, posted a photo with host Giuliana Rancic on his Twitter page, Thursday (May 24), and appeared on the program later in the evening. While he has yet to announce his official departure from BET, the proof is clearly in the pudding. BET is also keeping mum on whether or not he and Rocsi Diaz have thrown in the towel after seven years with the cable network. According to reports, Jenkins is doing a test run and may be hired based on whether or not the public responds well to his appearance on the nightly entertainment program. (Hip Hop Wired)

As of late, reports have circulated online claiming J and Diaz’s days on the show were nearing an end.

According to the New York Post, the VJs want to leave BET in order to pursue their acting careers. Most recently, Terrence appeared in the hit romantic comedy Think Like a Man, which made $33 million on opening weekend. He also had a recurring role on “The Game” during its first season on BET. Reportedly Rocsi has landed a role on a film starring alongside Lynn Whitfield, and she appeared in Gang of Roses 2. Neither Terrence J nor Rocsi have commented on the rumors. (S2S Magazine)