Gucci Mane Did Not Insult Judge & Say: ‘B*tch I Might Be’ [News] 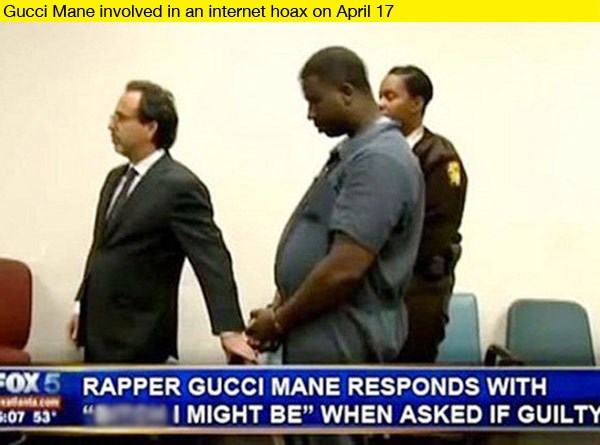 Reports swirled that the rapper insulted a judge in court when asked if he was guilty. But it turns out that it was a fake screengrab! Read on for the details and we found out it’s fake!

Gucci Mane says he’s innocent! Well, not of his recent crimes, but of allegedly cussing out a judge in court.

Gucci Mane Did Not Insult A Judge

A screenshot went around the internet of Gucci standing in court with the caption: “B*tch I might be.” The report claimed that it was taken from a Fox News report and that the judge asked Gucci if he was guilty of assaulting a soldier.

The line is actually a lyric from his song “Pillz (B*tch I Might Be). So it turns out this is fake!

The rapper was released on April 12 on bond for aggravated assault but was arrested again, the very next day. A judge sentenced Gucci to house arrest for allegedly cracking a champagne bottle over a fan’s head.

We told you that James Lettley, a big fan of Gucci’s, asked a security guard in the VIP section of Harlem Nights in Atlanta if he could get a photo with the rapper.

“I’m in the military. I wanted to get a picture with Gucci Mane, is it OK?” James, who was celebrating his birthday, asked a security guard. “I was speaking to the security guard, and Gucci Mane hit me in the head with a bottle.”

The solider said that he was then struck again by one of Gucci’s friends, before he was taken to the Grady Memorial Hospital by ambulance where his injury required 10 stitches.

“That is dangerous because if there was to be any other fan trying to approach him, ain’t no telling what else he might do to them,” he said. “He could have possibly killed me. I just hope and pray that I recover pretty well because I still want to serve my military career.”