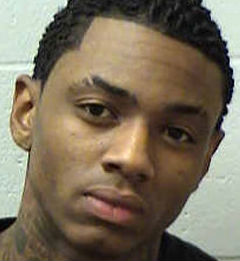 Why was he running from police? I’m not too sure, but I bet there was no reason for it. ::cough cough::

It all started around 9 P.M. when an officer responded to a call about people hanging out at a house that might possibly be abandoned. That group of people was Soulja Boy and a crew of people who were there shooting a video. Once the officer arrived, about half of the people took off running. (Reminds me of Dorm Parties) Soulja Boy included.

After a few minutes, Soulja returned and was prompty arrested and charged with obstruction, which is a misdemeanor.

-GT
CREDIT TO MTO FOR BEING THE FIRST TO REPORT ON IT!!!!